Letting a Broody Hen Hatch Chicks: Diary of a First-Timer Skip to main content
// Add the new slick-theme.css if you want the default styling

Letting a Broody Hen Hatch Chicks: Diary of a First-Timer 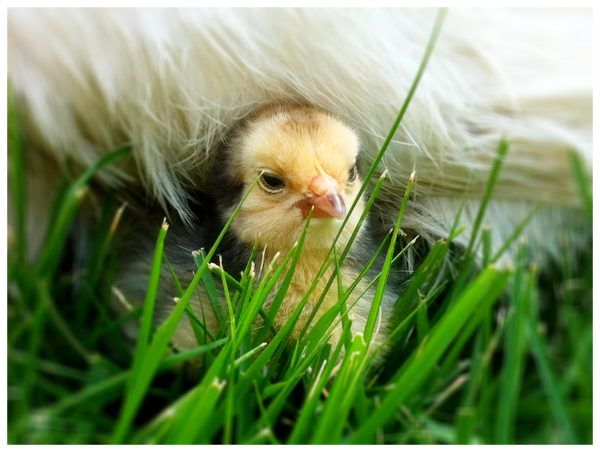 I’ve been raising chickens for a little over two years now and while some people think that sounds like a long time, let me tell you—I find myself in new and interesting situations on an almost daily basis!

The first chicks I brought home were mail-order. I ordered nine female chicks of assorted breeds and waited with anticipation for their arrival. I prepared the “chicken yard” and coops, I put together a brooder, and I read almost every related website and forum I could find. While I thought I had all my ducks in a row, there were several things I wasn’t prepared for—the mess in my spare bedroom, the thick layer of dust that resulted from feathers growing in...

The next round of chicks was hatched out in an incubator during a warmer season and moved outside much more quickly. This was pretty good, but my other birds terrorized the newbies until they were old enough and big enough to hold their own.

This year, I decided to let my broody Silkie “Marie Antoinette” hatch out some fertile eggs in the hope that integration would prove easier and I would have no need for a brooder or indoor setup. Plus, I was pretty excited to let Marie Antoinette finally have the babies she wanted so badly. What could be cuter than a fluffy white Silkie walking around with a trail of little fuzzball babies peeping after her?

It wasn’t until late April that I decided I wanted to add to my flock. One of my two blue egg layers passed away due to a particularly nasty case of egg binding, and with my flock down from 12 to nine I thought we could find room for a few replacements. As it was already May, I wanted to move quickly to increase the odds of some of the chicks beginning to lay before the winter came. I already had a bit of a “wish list” of breeds, so I tracked down a couple of breeders who had eggs available and placed my order. I ordered more eggs than I knew I would be able to fit under my broody hen, but the lowest number I could get per breed was three and there were so many lovely breeds!

On May 1st, I placed three “Easter Egger” eggs, two Golden Lakenvelder eggs, two Black Copper Maran eggs and two Welsummer eggs under Marie Antoinette. As a general rule, six standard-size eggs under a Silkie is more appropriate, but this particular hen was rather large for a Silkie and choosing the smaller “pullet-size” eggs from the fertile eggs I ordered ensured that all of them could be covered appropriately. We marked our calendars for May 22nd and began our hopeful conversations about which ones we especially hoped would hatch and be girls.

After 10 days, I waited for nightfall to go out and candle the eggs to see if they were developing. I knew from experience that I wouldn’t be able to see through the darker shells (i.e., the Black Copper Marans and Welsummers), but the white eggs of the Golden Lakenvelder were easy enough! I could see that one egg was developing for certain, one egg was definitely not developing and one I wasn’t sure about. I discarded the one that wasn’t developing and moved on to the light green eggs of the Easter Eggers only to determine that I really couldn’t see too well into those either. “Well,” I said to my husband, “at least one egg is developing. That’s a good sign, right?”

It was borderline painful to wait another 11 days to see what would hatch. Without disturbing Marie Antoinette too much, I barely peeked under her the day before the eggs were “due” and managed to see at least one pip (the small airhole that a chick cracks in an eggshell 12–24 hours before hatching).

After work on May 22nd, I checked again and saw a little beak peeking out of a Golden Lakenvelder egg. 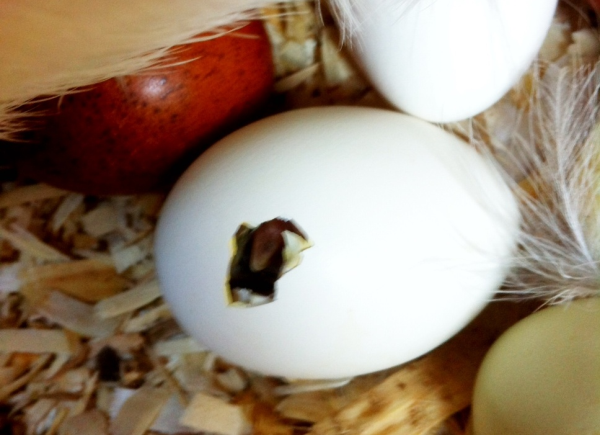 He hatched out sometime that night, and four more chicks followed at approximately 12-hour intervals over the next few days, with the last chick hatching on the morning of Friday, May 25th. After the last chick had hatched, Marie Antoinette started walking around and eating, leaving the remaining three eggs. Seeing no pips on them, I gently cracked them open to confirm there was nothing inside. Apparently, she knew she was done! I ended up with one Golden Lakenvelder, one Black Copper Maran and three Easter Eggers. They are all around four weeks old now and I’m playing the ever-so-fun “is it a she or a he?” game. The Golden Lakenvelder is definitely a boy, and I’ve already found a great home for him once he gets a little older (my neighbors strongly prefer that I keep hens only). The Black Copper Maran and at least one of the “EE”s are girls, which is exciting. The remaining two “EE” chicks remain a mystery as of yet.

Mama and babies are living separately while they grow up a bit, and I’m dreading the eventual integration with the flock, but the overall experience was fun and exciting! I’d say that I’m very likely to use this method to add chicks to my flock from here on out. After all, I was SO RIGHT about the cuteness! 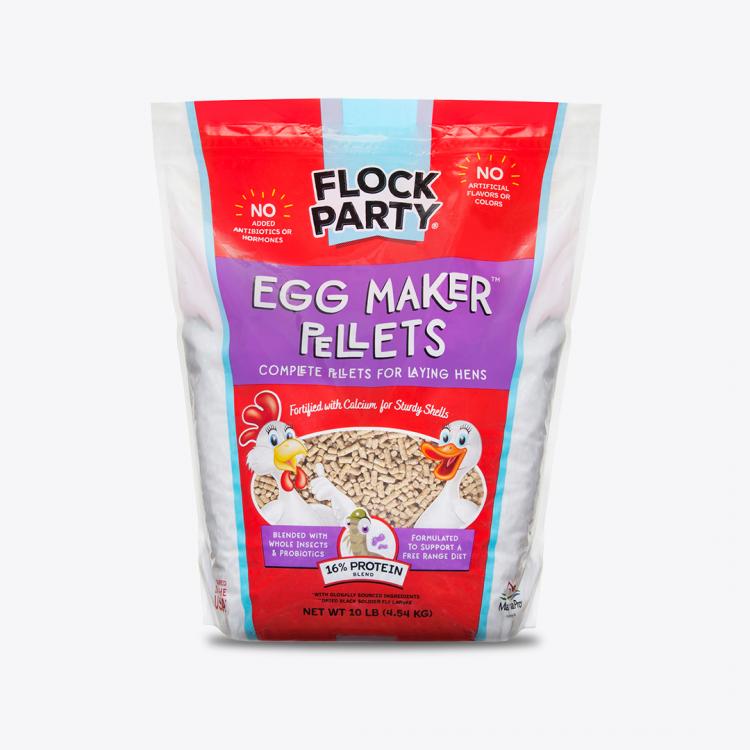 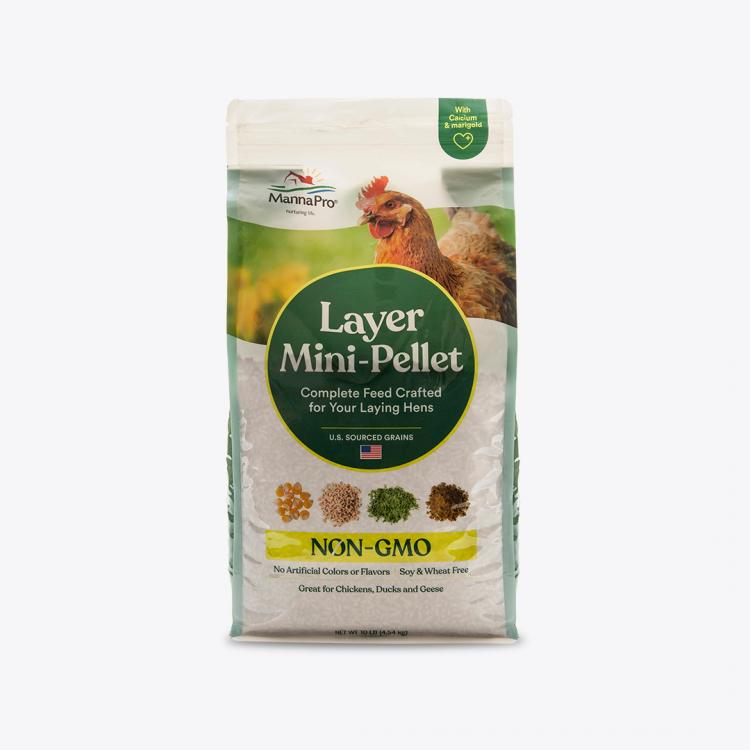 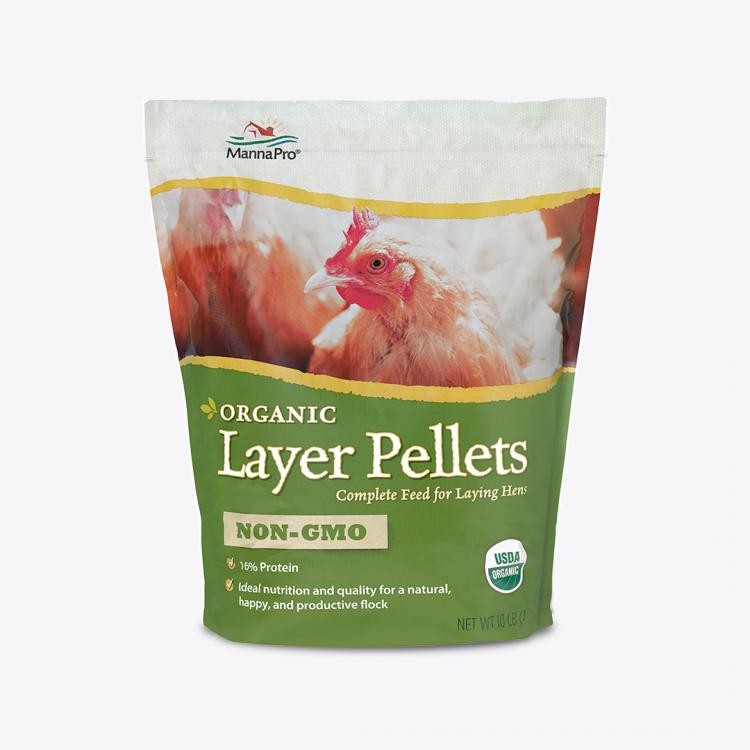 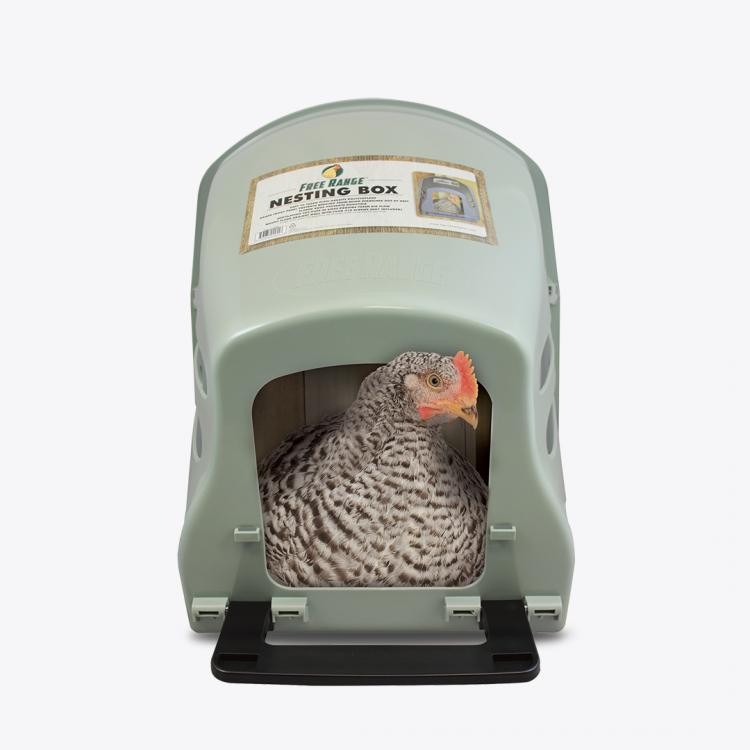 I let a broodyhen hatch eggs last year. She was up in an upper nest box and we movedit and her to the ground after 3 hatched. At that point she abandoned the unhatched ones. I don't remember if they were fertile or not. I think it was because we moved her. Anyway, we didn't separate her and the chicks from the other hens or rooster. She was very protective and no one messed with them.
Now this year one of those chicks went broody and we gave her 8 to set on. They were all fertile and growing. But at 21 days nothing hatched. We let her stay on another week and then took them. Not a one hatched. We're stumped. Only thing I can think of is she didn't turn them enough or the bottom of the nest box was to airy and the eggs got cold. Still perplexed.
Well yesterday the first broody hen went broody so I'm hoping the the experienced hen will hatch these eggs.

Oh how lucky to go through this experience! I'd love to try this, but I don't have a broody hen. Might have to add one to the flock next year. I love the look of Silkies, they are so cute.